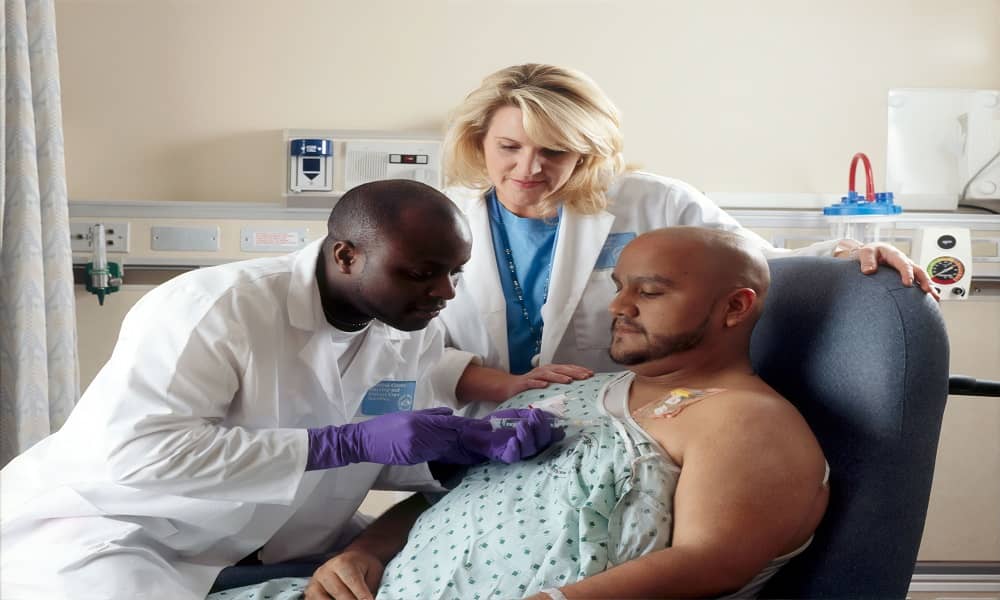 25 May Carcinoid Syndrome and Neuroendocrine Tumors: Signs and Diagnosis

Posted at 19:08h in Diseases by Marcus Elburn 0 Comments

Carcinoid syndrome is a condition caused by the release of hormones and other chemical substances from carcinoid tumors.

These carcinoid tumors can cause carcinoid syndrome almost anywhere in the GIT (Gastrointestinal Tract) but it usually inflicts the stomach.

Other common areas where the tumor shows its symptoms include the small intestine, colon, and appendix.

As a matter of fact, this syndrome is one of the rarest syndromes caused by the rarest form of tumors.

But it definitely has some common symptoms which people usually don’t associate with such a fatal disorder.

This makes the syndrome take a fatal end and often people lose their lives without even knowing the right reason.

This piece gathers some valuable information regarding this rare form of cancer.

A carcinoid tumor develops from the hormone-producing enterochromaffin cells. These cells are responsible for producing hormones and chemicals and are found in the GIT and bronchi.

They produce various types of substances like serotonin, dopamine, tachykinins, and other chemicals.

All these chemicals further have a significant impact on the circulatory system, GIT, and the lungs.

Hence, you can also call such substances vasoactive amines.

Since these tumors are mainly developed from enterochromaffin cells, they often result in the abnormal secretion of hormones.

The hormones come together to cause some serious symptoms of carcinoid syndrome which we will talk about later.

Well, both of them are distinct as the former is mainly responsible for carcinoid syndrome while the latter causes symptoms like abdominal pain due to their local effects on the intestine.

As mentioned, carcinoid syndrome triggers symptoms because of the hormones and chemicals released by the tumors.

Also, these symptoms are often similar to the symptoms of conditions like menopause and asthma.

For example, carcinoid flushing is similar to the flushing you see during your menopause.

The carcinoid tumors can be found anywhere in your stomach, intestine, lungs, pancreas, testicles, or ovaries.

However, if you get carcinoid syndrome, it usually means that cancer has spread to the lungs or liver.

In most cases, the doctor is not able to remove it in time because of urgency.

But if you visit a doctor as soon as you see the following symptoms, he/she might be able to remove them.

The most common symptoms of carcinoid syndrome include:

Let us have a closer look at these symptoms to understand the medical condition better.

About 50% of people suffering from carcinoid syndrome suffer from heart diseases.

This is because carcinoid syndrome causes scarring and stiffness of the tricuspid and pulmonic valves of the right side of the heart.

The stiffness of these valves causes a decrease in the pumping ability of the right ventricle to the lungs.

This often leads to heart failure.

Some of the common symptoms of heart failure are:

The stiffness of your heart valves during carcinoid syndrome is mainly because of the release of serotonin in blood in excess amounts.

This is a rare symptom that has only been seen in 10% of the people suffering from the syndrome.

It is usually caused by the bronchospasm which is the constriction of bronchial airways.

This is mainly because of the over secretion of hormones by the carcinoid tumors.

This is a common symptom among patients suffering from carcinoid syndrome.

The pain is mainly due to the spread of tumors in the liver and neighboring tissues.

It can also be because of the tumor causing bowel obstructions.

Apart from this, other symptoms like carcinoid leg pain or carcinoid rash along with flushes can also appear.

Though the carcinoid syndrome rash is not quite common, you might see red patches appear on your skin during flushing.

As most of these symptoms are quite common among other diseases, you might wonder what causes the syndrome.

Hence, let us talk about the causes and the complications that result in Carcinoid Syndrome.

You already know that Carcinoid syndrome is mainly caused by carcinoid tumors.

These tumors are mainly found in your GIT, stomach, small intestine, appendix, and colon. However, only a small percentage of carcinoid tumors actually secret abnormal levels of hormones leading to carcinoid syndrome.

When these hormones or chemicals are secreted, your liver tries neutralizing them before they can travel and cause problems in your body.

But what if the tumor attacks the liver itself?

It starts secreting the hormones which cannot be neutralized anymore.

Hence, most of the people suffering from the syndrome have advanced levels of cancer. On the other hand, some of the tumors don’t spread and are benign.

For example, lung tumors don’t attack the liver causing the syndrome. But the tumors of the intestine secrete the chemicals that may pass through the liver.

Now, if we talk of complications, one of the major issues that arise due to the syndrome is the carcinoid crisis symptoms.

It can occur in people with carcinoid tumors when they are exposed to certain chemicals like anesthetics. This can be fatal!

Hence as a carcinoid crisis treatment, the doctor gives certain medications before treating the syndrome.

But for treating it, your doctor will have to first diagnose the disease. And the diagnosis involves the following processes.

For diagnosis, your doctor will assess your signs and symptoms for ruling out other possible conditions causing the same symptoms.

If no such causes are found, your doctor will conduct certain tests to confirm the suspicion of Carcinoid Cancer.

Your body breaks down serotonin into 5-hydroxyindoleacetic acid. Diagnosis is confirmed by examining the excretion of this metabolite of serotonin.

As certain drugs might interfere with the test, your doctor will advise you to stop using them before the test. On the third day, a 24 hours urine test is collected for examination.

If the normal excretion levels of 5-HIAA are less than 10 mg, then there’s nothing to worry about.

Though, patients with the syndrome show more than 50 mg of 5-HIAA a day in their urine examination.

This involves certain tests like angiography, CT, or MRI scans.

The same techniques are used to localize any non-cancerous tumors. Localization might need laparotomy too which is an extensive form of examination.

Scanning with radionuclide-labeled somatostatin with certain chemicals is also used for localizing the tumor. This carcinoid test mainly helps to identify the metastases with a high degree of sensitivity.

Chromogranin A is a type of protein produced by carcinoid tumors.

Hence, the test for this protein also confirms the diagnosis. However, it is not as widely used as the test for 5-HIAA.

This is usually a carcinoid blood test where the blood levels of chromogranin A correlate with the amount of carcinoid present in your body.

#4. Cameras to See Inside Your Body

Doctors often use a long, thin tube equipped with a lens or camera to examine various areas of your body.

This is mainly an endoscopy involving a scope that goes inside your throat helping a doctor see your GIT.

Bronchoscopy helps in finding lung carcinoid tumors by sending a scope inside your lungs. Whereas, colonoscopy is done to locate the tumors in your rectum.

Sample tissue from the tumor is cut off to assay it for confirming the diagnosis. This type of biopsy depends on the location of your tumor.

Once the diagnosis is confirmed, your doctor can go for any of the following treatments.

To treat carcinoid syndrome, your doctor will treat the carcinoid tumors.

He/she can use a single or a combination of treatments for the same.

The surgery could be either to remove the organ with the maximum number of tumors like the appendix.

Or it could just be the removal of a part of the affected areas like a section from the bowel.

Moreover, there are various ways of conducting the surgery depending upon the location of the tumor. For example, your doctor can use an electric current to burn the tumor or cryosurgery to freeze it.

Another option for the surgery includes radiofrequency ablation, which includes sending a tool that sends electrical energy into the tumor. This kills the cancer cells.

Chemotherapy involves using strong medicines to kill the cancer cells or slow down their spread.

Some of these drugs include oral ones. Other medications are intravenous and require injecting them into the vein. Usually, this therapy results in side effects like loss of hair.

One of the most common therapies includes radiation therapy that can destroy the cancer cells or prevent them from multiplying.

The radiation is mainly given through a machine that is placed outside your body.

However, your doctor can even place a small radioactive material inside your body near the tumor for this therapy.

This treatment kills the cancer cells in your liver by blocking the blood supply.

Your doctor threads a tube called a catheter into one of the arteries supplying blood to your liver. Then an injection of certain particles blocks the blood flow to the tumor residing in your liver.

This therapy is famous as immunotherapy which strengthens your immune system.

Doctors inject drugs into your body to make your immune system capable of killing the tumor on its own.

Certain drugs help to relieve the symptoms like skin flushing.

These drugs might also help in preventing the growth of tumor cells.

Certain medications attach to the carcinoid cells and prevent them from releasing chemicals causing the syndrome. However, they can cause minor side effects like nausea, gallstones, and pain during injecting them.

Apart from the treatment, one can also follow some of the preventive measures to manage the symptoms.


There are certain changes that you can bring in your life to prevent severe symptoms of the disorder.

To keep a check on the symptoms, avoid these triggers:

However, the triggering element usually varies from person to person.

Hence, always follow a healthy and nutritious diet full of fresh veggies and fruits as a preventative measure.

If you’ve any of the symptoms, it really shouldn’t be a cause for alarm as these signs can be common among a whole host of health issues.

However, it pays to keep a regular check on your health, monitor the changes you feel, and see a doctor you’ve multiple symptoms at once.

Last but not the least question, Is carcinoid syndrome fatal?

Well, if the whole tumor can be removed, it can be a cure to cancer and its symptoms. But even if the surgeons fail to remove it entirely, it could still be controlled with medicines.

Moreover, people suffering from this type of cancer have a good life expectancy with 70 to 80% of people surviving five years from the diagnosis.

But as the tumor grows, it will need surgery.

Unfortunately, it becomes fatal when it spreads to areas that make removal complicated.

Hence, like all the other tumors, we can only control their spread and try to relieve the symptoms.